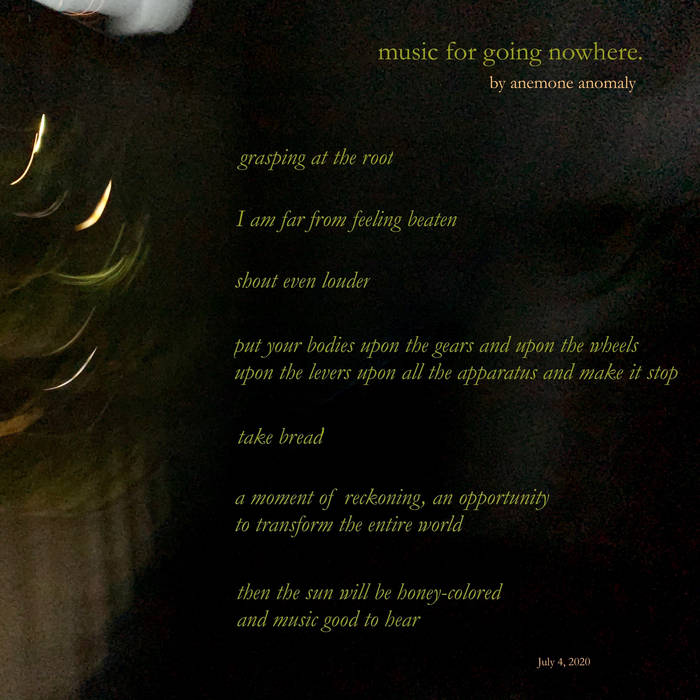 EXTENDED RIFFS
1. IF WE ARE NOT AFRAID to adopt a revolutionary stance – indeed if we wish to be radical in our quest for change – then we must get to the root of our oppression. After all, radical simply means 'grasping things at the root'.
– Angela Davis, 1989: Women, Culture & Politics

2. YOU MUST REALIZE THAT I am far from feeling beaten.... Under these conditions, one should have acquired such a profound conviction that we bear within ourselves the source of our own moral strength – that everything depends on us, on our energy, on our will, on the iron coherence of aims that we set for ourselves and the means we adopt to realize them – that one will never again despair and lapse into those vulgar, banal moods that are called pessimism and optimism. My own state of mind synthesizes these two feelings and transcends them: I'm a pessimist because of intelligence, but an optimist because of will. Whatever the situation, I imagine the worst that could happen in order to summon up all my reserves and the will power to overcome the obstacle.
– Antonio Gramsci, 1929: Letters from Prison

3. A STORY: A JUST PERSON decided to save humanity. So they chose a city, the most sinful of all cities. Let’s say it was Sodom. So they studied. They learned all the art of moving people, changing minds, changing hearts. They came to a man and woman and said, “Don’t forget that murder is not good, it is wrong.” In the beginning, people gathered around the just one. It was so strange, somewhat like a circus. People gathered and listened. The just one went on and on and on. Days passed. Weeks passed. People stopped listening. After many years, a child stopped the just person and said, “What are you doing? Don’t you see nobody is listening? Then why do you continue shouting and shouting? Why?” And the person answered the child, “I’ll tell you why. In the beginning, I was convinced that if I were to shout loud enough, people would change. Now I know they won’t change. But if I shout even louder, it’s because I don’t want them to change me."
– Elie Wiesel, 2000: Speak Truth To Power: Human Rights Defenders Who Are Changing Our World

4. WE'RE HUMAN BEINGS! There's a time when the operation of the machine becomes so odious, makes you so sick at heart, that you can't take part! You can't even passively take part! And you've got to put your bodies upon the gears and upon the wheels ... upon the levers, upon all the apparatus, and you've got to make it stop! And you've got to indicate to the people who run it, to the people who own it, that unless you're free, the machine will be prevented from working at all!
– Mario Savio, 1964 Freedom's Orator: Mario Savio and the Radical Legacy of the 1960s

5. ASK FOR WORK. IF they don't give you work, ask for bread. If they do not give you work or bread, then take bread.
– Emma Goldman, 1893: Anarchism and Other Essays

6. WE ARE LIVING THROUGH a third Reconstruction and the great rebellion of the summer of 2020 marks a moment of reckoning between real freedom and fascism.
The first Reconstruction in the 1860s was an effort to expand social democracy to include everyone. And it faced a backlash, that is, it was crushed under the weight of racial terror, Jim Crow, disfranchisement. The second Reconstruction was an attempt to expand the democracy we had to include all people, but also deal with some of the social justice issues of housing and police violence, but had a conception of democracy which is still based on a system where you can just sort of tweak the Constitution, or tweak our rights and have them apply. The presumption was the constitutional basis of our system was sound, we just had to fix it to include everyone. This generation is saying it’s not sound and it never has been sound. It’s been based on dispossession, white supremacy, and gender violence. And so this vision of abolition is not simply: better jails, better police, better training. It’s: no police, it’s: no jails, no prisons. It’s creating a new means of justice that’s not based on criminalization but based on affirmation and reparation, and by reparation that is trying to repair relationships that have been damaged and destroyed as a result of five centuries of warfare against Indigenous peoples, Africans, poor white people, Asian-Pacific Americans, and Latinx populations.
So here is an opportunity to actually transform not just the nation but the entire world.
– Robin D.G. Kelley, 2020: Intercepted with Jeremy Scahill

7. THE WOMEN ADDRESS THE YOUNG MEN in these terms, now you understand that we have been fighting as much for you as for ourselves. In this war, which was also yours, you have taken part. Today, together, let us repeat as our slogan that all trace of violence must disappear from this earth, then the sun will be honey-coloured and music good to hear. The young men applaud and shout with all their might. They have brought their arms. The women bury them at the same time as their own saying, let there be erased from memory the longest most murderous war it has ever known, the last possible war in history.
– Monique Wittig, 1969: Les Guérillères


The power of the state comes from the people.
But where does it go to?
Yes, where is it going?
– Bertolt Brecht, The Collected Poems of Bertolt Brecht (1925-1933)

Bandcamp Daily  your guide to the world of Bandcamp